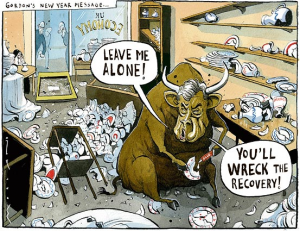 The China stock market is creating havoc and volatility around the world. It should be termed a bear in a China shop.

But is it as bad as it appears??

Last year the Chinese stock market (Shanghai index) went up a massive 154% (some periods recorded it as high as 170%) – a definite bull market.

In the past 8 weeks it has fallen more than 30% – a technical collapse.

China is not a mature market – it’s an emerging market.

80%-90% of the ownership of their share market is confined to their people, not institutions. And the Chinese Government in it’s infinite wisdom has recently and  actively been encouraging their people to buy into this share market rally (like the cab driver’s advice always near the peak).

People are emotional creatures and as much as we believe they are rational, opportunities in the market come from irrational behavior – often coined “irrational exuberance”.

The technical definition of a bear market is a 10% fall from the top of the market – this generally applies to developed markets where 2% variations in a day are considered extreme.

If we compare the volatility of China’s Shanghai market to a developed market and apply that mathematical difference to the definition of a bear market shouldn’t we say that a 50% fall in value is a bear market and 150% is a collapse.

BTW. Most fund managers invest in China through Hong Kong – a regulated, mature market where ownership is predominantly institutional. The rise in that market was around 20%. Exposure to China is generally less than 5% of a portfolio.

Definitely Time for a breather.