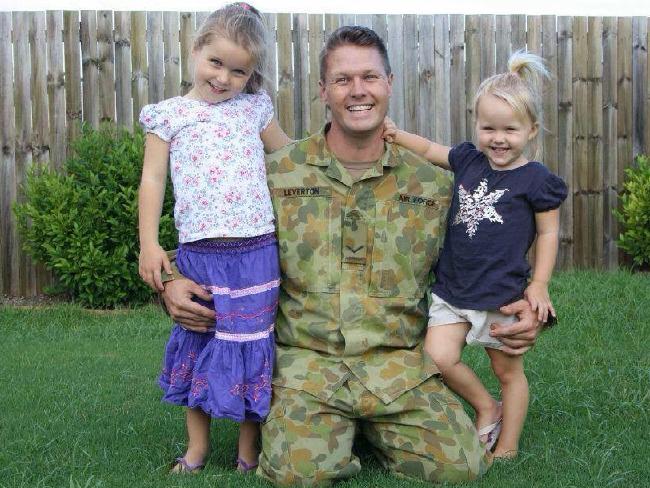 Why do we make wills? To look after the people we love, after we’ve gone.
Sunday Night promo – Olivia Mead’s win against a powerful empire

The hardworking RAAF mechanic had just returned from a humanitarian mission in Vanuatu, where he’d helped rebuild after the devastation of Cyclone Pam, when his life was cut tragically short.

While surfing with friends at Arrawarra on the mid-north coast of NSW, Mr Leverton suddenly collapsed after complaining of chest pains.

He died on April 4, 2015, leaving his family devastated by his premature loss.

Former partner Angela Watson, the mother of Mr Leverton’s children, believed their future would be secured, having long ago been named as the executor and sole beneficiary in his will.

But what she didn’t know was that the vast majority of her ex-partner’s estate — the $451,500 worth of retirement savings and life insurance held in his superannuation account — would be divided up with little weight given to his written will.

A woman with whom the soldier had a comparatively new relationship lodged a claim with Military Super, and was awarded $352,170 — leaving just $49,664 each for his daughters.

The family appealed to the Commonwealth Superannuation Corporation, which upheld the decision and found that the woman had been living in a domestic relationship with Mr Leverton for nine months before he died.

It relied on a statutory declaration made by Mr Leverton in August 2014, declaring that the woman was living with him as his partner, evidence of joint bills and banking activity and a RAAF minute approving his application naming the woman as his “interdependent partner” in November 2014.
But the airman’s family insists that he never intended for the woman to inherit his estate, saying he only made her his defacto to avoid being posted interstate — a fate that would have taken him away from his beloved daughters.

“In mid-2014, the RAAF advised Daniel that he was going to be posted to Katherine in the Northern Territory,” dad Geoff Leverton said.

“It put a terrible burden on Daniel because he didn’t want to be away from his girls, and he asked if there was a way around it.

“He had a casual relationship with a young lady at the time … So they advised him that even though it was well below the de facto relationship civil laws of Queensland which is two years, that if he signed a stat dec, they could be recognised as de facto — and then Daniel wouldn’t have to be transferred.”

But the move appears to have backfired, with the couple’s de facto status barring Mr Leverton’s daughters from a bigger slice of his estate, an outcome the family believes defies his wishes.

His father dubbed it a “travesty of justice” that “defies common sense”.

“Why do we make wills? To look after the people we love, after we’ve gone,” he said.

Ms Watson said her ex-partner would have been horrified to know that his daughters were missing out on hundreds of thousands of dollars that could have been used to pay for their education and upbringing.

“He’d be so angry to know that this was happening, which makes it even worse — but there’s nothing we can do about it,” she said.

“When we separated I was the executor of his estate and sole beneficiary of his will, because he knows anything will go to the kids.”

She said she’d remained on amicable terms with Mr Leverton, who saw his daughters regularly and that they had continued to spend Christmas together as a family.

He had never changed the will he made in 2008, despite being invited to do so by the RAAF before each overseas mission he took, she said.

Ms Watson said she wanted to share her story to help prevent other families from ending up in the same situation.

While her ex partner had a valid will, he had never thought to nominate a beneficiary on his superannuation account — a move that may have ensured a different outcome.

“We can’t gain anything now, we can’t get the money back, but I just want people to be aware,” she said.

“People think that a will covers all that stuff, but it won’t.”

PROTECT YOUR LOVED ONES

Will Barsby from Shine Lawyers said many Australians had no idea that they needed to nominate a beneficiary on their superannuation policy, or that deceased members’ accounts were dealt with separately to a will.

“As part of our superannuation practice a lot of families come in, more often than not, with no beneficiary nominated,” Mr Barsby told news.com.au.

“It really causes a lot of confusion. We see a lot of hardship.”

Superannuation companies make the decision about who to pay out deceased accounts to, and in what amounts, with a tribunal hearing disputes and some appeals being heard in the Federal Court — although this is costly.

Mr Barsby advised Australians to make a binding nomination with their superannuation company, naming the person they want to be their beneficiary.

“If you do that, you have a pretty good chance of your wishes being respected,” he said.

Not all superanuation companies allow their members to make a binding nomination, however.

News.com.au has sought comment from Mr Leverton’s defacto through her lawyers.

At SWM Finance Matters we contemplate these situations within our Superannuation, Retirement and Estate Planning strategy work.

We also have Estate Planning experts at our disposal providing experienced, sage advice with the benefit of these types of legal cases foremost in mind.